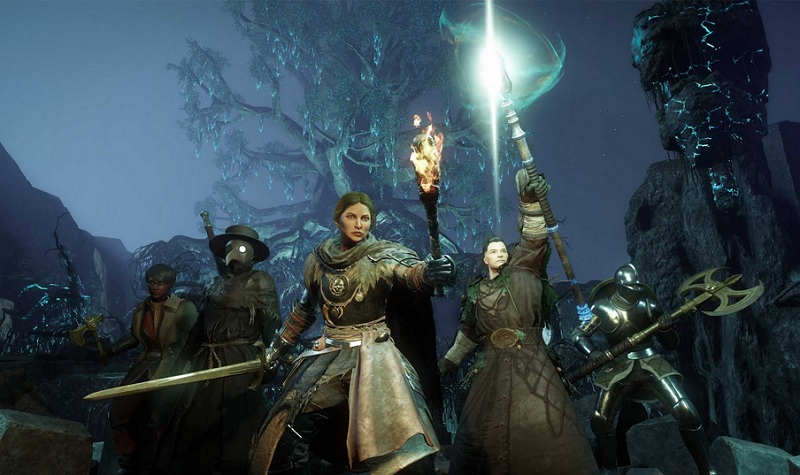 The latest New World update is 1.0.3 also adds a new “The Stoic” in-game title. The title will be automatically granted to your character and can be equipped by navigating to the Character menu, selecting the “Bio” tab, and selecting “Change” in the title section of the screen. It may take up to a day for “The Stoic” title to appear in the list of available titles.

The latest update also adds new “Waiting” emote to the in-game store— for free— as an additional thanks for players for their patience.

To claim the emote, navigate to the in-game store and select the “Emotes” tab, where you’ll find the “Waiting” emote available for free. Emotes are account bound, so you’ll only need to claim it once on your Steam account, even if you have two characters.

While we want everyone to find their long-term home in Aeternum as soon as possible, we also want to ensure that the process is safe and ready for everyone to use. We’ve been hard at work on the feature and testing it for the past two weeks, but because this feature is brand new we have decided to take a safe, incremental approach to rolling out transfers to all players.

When all worlds are back online from downtime, our plan is to monitor the framework we created without turning transfers on immediately.

Once we have confirmed that the framework holds up at scale, we will turn on character server transfers in the Utopia world first, in the AP Southeast region. We will closely monitor transfers in this world, and if anything out of the ordinary occurs our team will need to make manual interventions.

If all goes well, we will turn it on for the rest of the AP Southeast region, and continue monitoring. If after 8 hours our team hasn’t discovered any issues, we will fully deploy character server transfers to the other regions.

Please review the video and FAQ below so you can understand how the transfer process will work, the limitations, and how it impacts your character. Each player will receive one free character transfer token.

Enjoy your new home in Aeternum!

How do I transfer my character?

What comes with me when I transfer?

What does not transfer with my character?

Where can I move my character to?

Will there be opportunities to transfer again if I choose the wrong world, the world my friends chose filled up, or I regret choosing the world I transferred to?

Update: Our team was able to include a few other urgent fixes into this week’s update. The following issues have been fixed.

Additionally, we discovered that our fix for the issue with titles and achievements not always updating correctly will need some additional work, and we’ve removed it from the list. We’ll continue to work on a fix for this issue, and many more, to release in future updates.

The fixes listed below are tentative fixes and mitigations. Our goal is to get these changes out and see if issues persist, so we can continue to work on them and address in a future update if necessary.