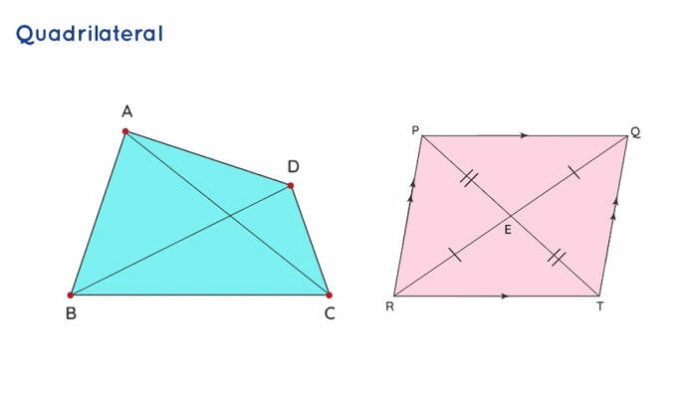 Trapezium: Trapezium is a type of quadrilateral where two sides of the shape are parallel to each other. In this quadrilateral shape, there may not be four equal sides, but it is necessary to have one pair of sides that are parallel. Suppose there is a shape with four sides named A, B, C, and D, then side AB can be parallel to side DC.

Rectangle: A rectangle is one of the most common types of quadrilateral shapes. In a rectangle, all the angles are perpendicular to each other or at the right angle. All the angles in a rectangle measure equal, i.e. 90o. The two pairs of opposite sides are equal in length and parallel to each other. Since all its sides are parallel, it can also be called a type of parallelogram.

Square: It is the most common type of quadrilateral that we have been studying since primary school.  All four sides are equal in this shape. In a square, all the angles are also equal. Every angle is at 90o measurement. And the pair of opposite sides are parallel to each other.

Rhombus: It is a type of quadrilateral with equal lengths on all four sides. It is also a type of parallelogram, but here all sides are equal. A rhombus is a quadrilateral that looks like a parallelogram when it makes a resemblance to a square regarding the lengths of the sides. The opposite angles of a rhombus are equal, and opposite sides are parallel. Rhombus is also called a diamond.

Kite: As the name suggests, a kite is a quadrilateral that looks like a literal kite. It is a shape where two pairs of sides are equal in length. They are also adjacent to each other. A kite has perpendicular diagonals.

So we learn that not every object that we see is a square or rectangle. It can be so many other shapes too. It can be a trapezium or even a rhombus. An object can also constitute a pentagon shape and not necessarily only quadrilateral shapes. After understanding this, we will now have a clearer perception of different shapes and their types every time we see a new object or a figure.

It becomes necessary to learn such basic things in our lives. Now with Cuemath, a platform for math-minded people, you can learn even more interesting topics anywhere and anytime. It will help in enhancing your knowledge and intelligence concerning several concepts.

Next time you see a piece of cloth, make sure to compare and find a conclusion to test yourself!