BioWare’s ANTHEM has already made its debut at E3 2018 but if you have missed the announcement and were looking for ANTHEM’s final Release Date, Price, Editions, and Pre-Order details then here I have got you covered. BioWare has now officially confirmed that ANTHEM will be released on February 22nd, 2019 for PS4, Xbox One, and PC.

Like several other announcements at the event, BioWare also released new gameplay footage of its upcoming shooter game which you can watch below.

There two Editions of the ANTHEM which you can buy. The first one is the Standard Edition and the second is the Legion of Dawn Edition. 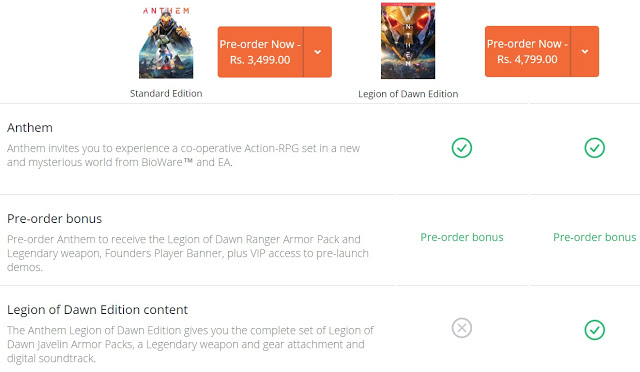 Pre-Ordering the Legion of Dawn Edition will get you the following bonuses.
– All the bonuses included in the Standard edition plus
– Complete set of Legion of Dawn Javelin Armor Packs,
– A Legendary weapon and gear attachment

Resident Evil Village Will Release in April 2021, According to a Leak

Returnal for PlayStation 5 Will Release in 2021, According To a Leak

How to Register and Get Invited for PlayStation 5 (PS5) Pre-order, Full Details Here