In an attempt to go with the latest regulatory policy change from TRAI for mobile calls related charges. Reliance Jio on Wednesday announced that it will start charging their customers 6 paise per minute for making calls to other mobile networks, starting October 10. According to Reliance Jio, the new 6 paise per minute charge on making calls to other networks will be based on the Interconnect Usage Charge (IUC) rate that has been fixed by the Telecom Regulatory Authority of India (TRAI).

You should keep in mind that the new 6 paise charge is for only making voice calls from Jio to any other no-Jio network. While all the Jio to Jio voice calls will still be available for free with no additional charge.

Reliance Jio has also announced four IUC top-up vouchers which users can recharge with to get free minutes to make a call to any non-Jio network. The IUC Top-Up voucher price starts from Rs. 10 and goes up to Rs. 100 and it can give you free IUC Minutes starting from 124 minutes to 1,362 minutes for making calls to non-Jio networks.

However, to compensate Jio users for the cost of these additional IUC top-ups Reliance Jio has also announced free 1GB 4G data for every Rs. 10 spent. With the below table you can easily check out all the top-up vouchers, IUC minutes and free 4 data that you will get with every top-up recharge.

Now, even the Reliance Jio has announced free 4G data to compensate for the cost of additional IUC top-ups for its users. Reliance Jio users don’t really seem happy with the latest 6 paise call charge to other networks. Reliance Jio users in India have now started responding to this new price change and how they have responded so far doesn’t seem good for Reliance Jio.

On the below Tweet from Reliance Jio, you can check out the user’s reply.

All you need to know about IUC. pic.twitter.com/svdSsrmT5s 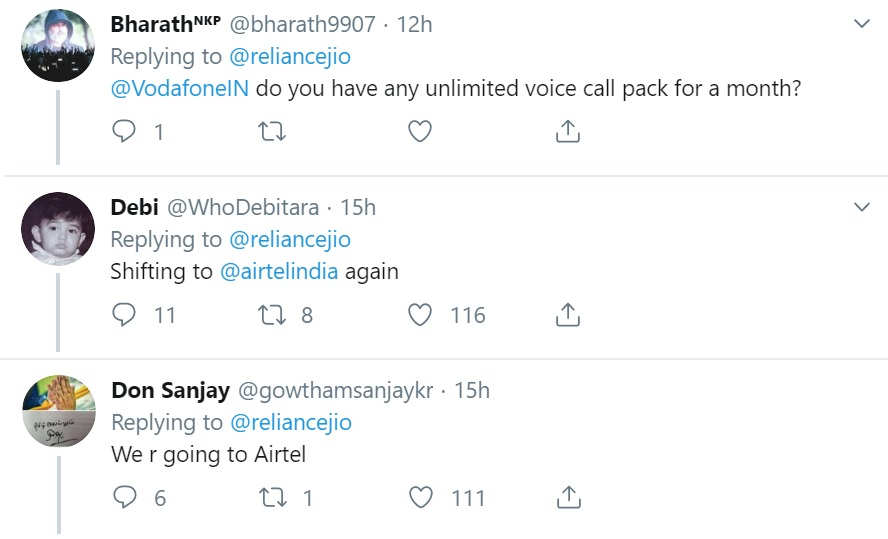 However, you should note that Reliance Jio has also said that the 6 paise per minute charge on making calls to the non-Jio network should remain only till the time TRAI abolishes IUC completely.

Notably, as per TRAI’s last amendment made in 2017, it is set to implement a zero termination charge regime on January 1, 2020. That means if no changes to this policy are made, the 6 paise charge on making calls to the non-Jio network may end up completely post to the above date.

What do you think about the new 6 paise charge on making calls to other networks from Jio SIM? Do let me know in the comments section down below.