Cyberockk
Home Mobile Moto G8 Plus is Receiving the Android 10 Update in India and...

Good news has finally arrived for the Moto G8 Plus users. According to the fresh report, Motorola Moto G8 Plus has now finally started receiving the latest Android 10 update in India and some other regions including Spain and Brazil.

As per the report by Motorola India Fans, Motorola has started rolling out an Android 10 Stable update for Moto G8 Plus in the form of a soak test for beta testers and will finally be available as stable update this month. 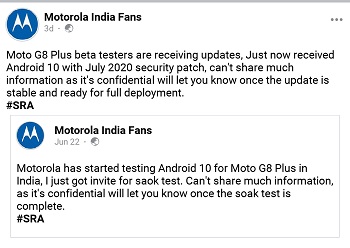 According to another report from hdblog, the latest Android 10 update is now also rolling out in Spain with software version QPI30.28-Q3-28. Notably, the update also brings along the July security patch and a couple of new features, improvements and fixes to the previous bugs.

Let me know if you have also received the latest Android 10 update on your Moto G8 Plus in the comments section down below.