Cyberockk
Home Gaming Everything You Need to Know About Hitman 3

Is there gonna be a Hitman 3? This and many more questions have traversed the minds of many players who have been enjoying the Hitman series. And the definite answer is yes. There’s going to be a fascinating Hitman 3 and will come stronger and better than the previous series.

The game will see Agent 47, the video game’s most popular assassin returns in the dying chapter of the franchise’s reboot. It surely promises to be the end of an era for Agent 47 and IO Interactive.

As we await the release date which is just weeks away, it is important to note that IO Interactive has worked itself out to ensure that the grand finale of Hitman 3 goes on as planned. And before you embark on what promises to be a mouth-watering encounter with the Hitman series, there are some important facts and points you need to know.

This article has compiled everything you ought to know about Hitman 3 as its launch date draws to a close. So, keep your mind focused on this, and let’s jack in!

There will be Hitmen everywhere

The Hitman reboot trilogy has always succeeded in its quest to space out its missions in self-contained pretty maps. As IO Interactive revealed, there will be three additional maps once the game is released in mid-January 2021. All the Hitmen located in every corner of the world will search for their targets in “Dartmoor”, Dubai, and Chongqing. Hitman 3 will incorporate both the new and old maps making it an exciting adventure to explore all the new and old locations.

Assassination regardless of the platform

In its past iteration, the Hitman series has never prioritized any platform. And this is not going to start with the third iteration of the series as Hitman 3 is set to be released on a myriad of platforms. The game will be launched on PC, Stadia, PS4, PS5, the Nintendo Switch, Xbox Series X/S, and Xbox One. This means that the Hitman fans have a wide range to choose from where they can play the game.

Steam users will enjoy the game fully after a one year waiting period for the expiry of another Epic Games Store paid-exclusivity. But despite this, there is a glimmer of hope with the returning players of the franchise. Players will be privileged to carry over progression from Hitman 2.

Steam users who cannot wait for the one-year exclusivity period will be able to import their Steam save data from Hitman 2 to Hitman 3 on Epic Games Store.

Hitman 3 will also feature the ability to replay the previous locations and missions from the initial games. Fans can also anticipate a similar set up of Hitman 2 in Hitman 3.

Hitman 3 has some of the best levels the fans will love. The first mission is in Dubai and is set in the Sceptre (the tallest skyscraper in Hitman’s world). Its lavishly decorated interior and dizzying exterior will be explored by Agent 47.

The second mission is a murder mystery and is set in an English Manor owned by Providence member Alexa Carlisle. Although this level is more compact when compared to the already explored levels from a purely square-footage perspective, it is home to an expansive story.

In this mission, Agent 47 assumes a new role of being a private investigator striving to solve a murder case. To get a viable solution, players are tasked with interrogating the witnesses, identifying clues, and trying to connect what happened. An alternative to this is walking straight to your target and shooting her in the face. You, however, miss the point in this one.

Agent 47 sendoff – An end to a gripping story

The die-hard fans of the Hitman series must have an inkling of where Hitman 3 could go. As for the fans, a story put in motion from the initial Hitman reboot needs a proper ending. And while Hitman 2 ended in a huge secret society infiltration mission capped off with a massive reveal, there is more to anticipate in Hitman 3.

Hitman 3 promises to be the proper sendoff of Agent 47 as fans of the new trilogy seek to connect the pieces in the story by Hitman 2. In Hitman 3, Agent 47 will carry on with the task of hunting down his targets by using deadly precision and skillful preparation. Hitman 3 will be the culmination of a terrific three-part of this amazing franchise.

All eyes are now on Hitman 3 to see how the story will end. But it promises to be a fascinating, thrilling, and satisfying end to this amazing three-set game.

In Hitman 3, Agent 47 will be given new tools as well as a wide range of interesting options to choose from while he is in the field. This will make the task of dispatching his enemies an easy one.

While in Dubai, the foremost action will be to scan a security pad using a camera for your field support to open it up for you. That is perfect as Agent 47 will be equipped with a camera that lets him scan keypads and also can be used in sending visual information to his handlers.

The visual information may be sent for instance when Agent 47 is investigating the murder in England. The camera, which will be incorporated into legacy Hitman 1 and Hitman 2 missions, may well be used as a camera to include various visual filters and zoom levels.

The passcodes once achieved will be entered digit by digit on keypads as the new detail for the Hitman games. Agent 47 can also interact with the computer terminals. For instance, he can use a kiosk in Dubai to know more about its construction and floorplan.

Hitman 3 release is scheduled for 20th January 2021 for PS4, PS5, PC (through Epic Games Store), Xbox One, Xbox Series X|S, and Stadia. But if you want your hands-on among the first then you can now also pre-order the game for PC, Stadia, and Consoles from their respective stores digitally.

Hitman 3 will be available in two different editions Standard and Deluxe edition. Below you can find the price of each edition, pre-order bonus content, and what each edition of the Hitman 3 includes.

The PS5 version doesn’t come with PlayStation VR mode, but if you have the PS4 version of the game then you can also enjoy the PSVR mode on that.

Note: Hitman 3 for Xbox supports Smart Delivery, so if you buy the game on the Xbox One then you get the next-gen upgrade to the Xbox Series X|S for no additional cost.

The deluxe edition of Hitman 3 comes with the base game, following preorder bonus, as well as the following additional content:

The Deluxe Edition includes the following additional and exciting new content with the base game. 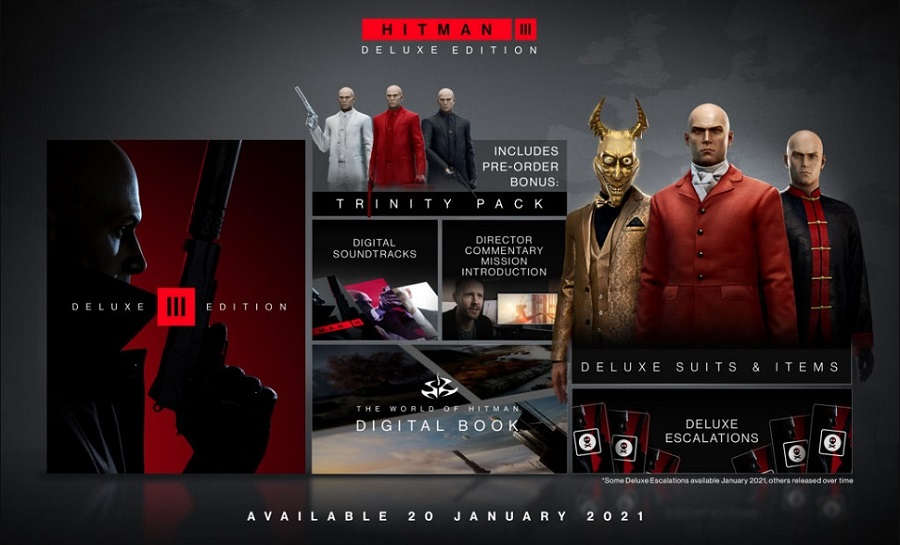 That is all you need to know about Hitman 3. As we wait for 20th January 2021, I understand that you are now well versed.

PS Plus Games for January 2021 Includes Maneater, Shadow of the Tomb Raider, and Greedfall