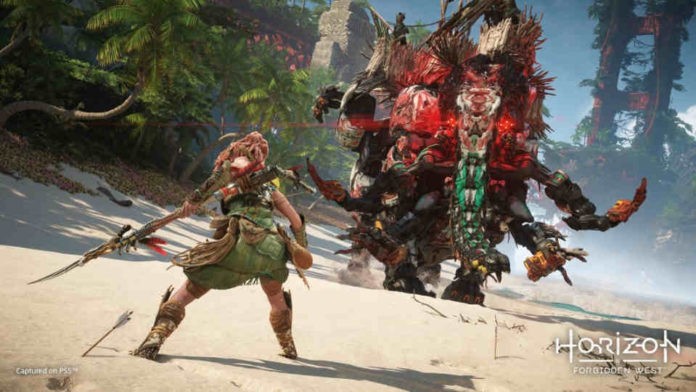 The new 14 minutes of gameplay footage of the upcoming action-adventure game captured directly on the PlayStation 5 console. The gameplay video below also showed us the new selection of deadly machines: Sunwings in the sky, Clawstriders and Tremortusks on land, Snapmaws, and the smaller (yet not to be underestimated) Burrowers in the water.

Get a quick official overview of the new gameplay below.

”In the State of Play gameplay footage, Aloy has sent her loyal friend Erend into the remains of San Francisco to recover an important artifact. But he quickly runs into trouble, encountering a rebel faction of the Tenakth tribe – vicious fighters who have somehow acquired the power to override machines. Aloy must cross the ruins and fight multiple enemies to rescue her friend and continue her journey.”

”This dangerous and unfamiliar land is full of challenges and threats, but Aloy will have new tools to help her on her way. The Pullcaster speeds up climbing, getting her quickly out of trouble; the Shieldwing allows her to safely descend from great heights (or surprise enemies from above); and with the Diving Mask, a whole new underwater world is open for exploration. Not to mention big upgrades to her Focus, which now shows areas that allow free-climbing and gives her the ability to override more machines for mounts or combat.”

Sony said that the development of the game is still underway and there no release date to announce yet.

Check out the gorgeous-looking 14 minutes of new gameplay for Horizon Forbidden West below.