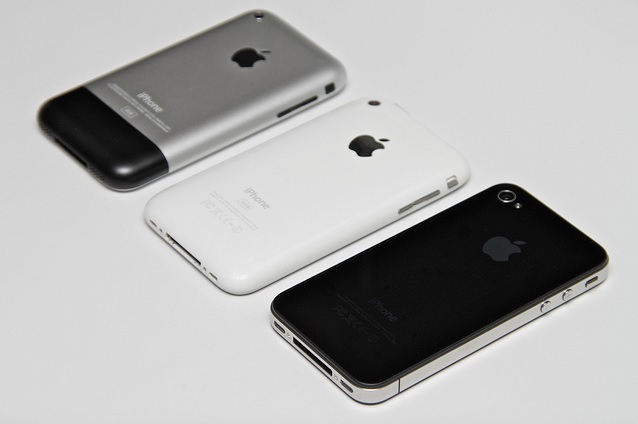 When Steve Jobs stood on stage and first said the word “iPhone” back in 2007, he was announcing much more than just another phone. He was announcing the beginning of a revolution in the mobile technology industry. Thanks to the iPhone, the smartphone stopped being viewed as the clunky keyboard-laden BlackBerry favored by businessmen and started being a cool, highly desirable gadget for people in every walk of life. The iPhone was not the world’s first smartphone, but it was the first smartphone to appeal directly to the consumer market.

Since then, though, despite maintaining a solid following among Apple’s faithful, the iPhone has steadily lost ground in the smartphone market to the Android platform. While early Android phones were often mediocre attempts to capitalize on the iPhone’s success, these days it’s Apple that’s stuck playing catch-up. The new iPhone 5 proves it. The simple fact of the matter is that the iPhone 5’s vaunted new features are things that have been standard on the best Android phones for years. To make matters worse, there are still a few such standards that Apple has stubbornly left off the iPhone yet again. Here are a few ways in which the iPhone 5 shows how Apple is, once again, late to the party:

First on the docket is screen size. Within a year of Android phones hitting the market in 2008, they started to grow. While the first Android phones were comparable in size to the original iPhone, the latest models often have screens in excess of four inches on the diagonal. Despite the increasing popularity of such phones, Apple has stubbornly stuck to their 3.5-inch display. While the iPhone 5 definitely takes things in the right direction by increasing the screen to 4 inches, the fact is that Apple has been too slow to recognize the simple fact that users want bigger displays.

Another common Android feature that iPhone’s lack is Near Field Communication (NFC) technology. Rumors of an NFC-capable iPhone stretch all the way back to 2010, shortly before the launch of the iPhone 4. The technology was already starting to show up in mobile payment systems like MasterCard’s PayPass, and it had even cropped up in a few Android phones. Despite the rumors, though, Apple left NFC out of the iPhone 4. When the next year came around, industry watchers thought that an NFC-capable iPhone was a certainty. Yet the iPhone 4S’s launch event came and went without a mention.

By the time the iPhone 5 came along, NFC was standard in most of the cutting edge Android phones. Surely, industry watchers thought, Apple won’t let another generation of iPhone go by without catching up to their competitors. But they did. With the iPhone 5 Apple falls even further behind the NFC curve, stubbornly refusing to implement a feature that becoming almost universal among the top Android phones.

Last, but certainly not least, is Maps. If you’ve been paying even a little bit of attention to the news surrounding the launch of iOS 6, you know that Apple’s much-anticipated in-house Maps app for has pretty much bombed with users. In fact, Apple’s new Maps app is so bad that it prompted a public apology from CEO Tim Cook and the creation of a prominent new Maps category in the iOS App Store.

If Apple was willing to implement such a half-baked and problematic mapping system in the new iPhone, what they had before must’ve been pretty bad, right? Wrong. What they had before – what every iOS device prior to the launch of iOS 6 had – was Google Maps, pretty much the best mapping solution on the planet. In fact, Google Maps remains deeply integrated into the Android operating system, and is being continually improved by Google.

Now, all this doesn’t necessarily mean that the iPhone 5 is a bad product. In fact, it’s quite a good product – at the very least it’s the best iPhone Apple has yet to release. But there’s a difference between being a good product and being a cutting-edge, industry-changing product. While the iPhone 5 is all well and good, especially for Apple’s fans, the fact is that if you want to find the leading edge of the smartphone industry, Apple is no longer the place to look.

Bill Stanton, the author, has been looking at iphone contracts but isn’t sure whether its worth the extra money.

Rizwan Ahmad
About the Author:
This article is contributed by Bill Stanton and posted by Rizwan Ahmad Author and founder of cyberockk.com, He is a tech blogger from India and he loves to share his thoughts by writing articles on this site to the different topics related to technology world,