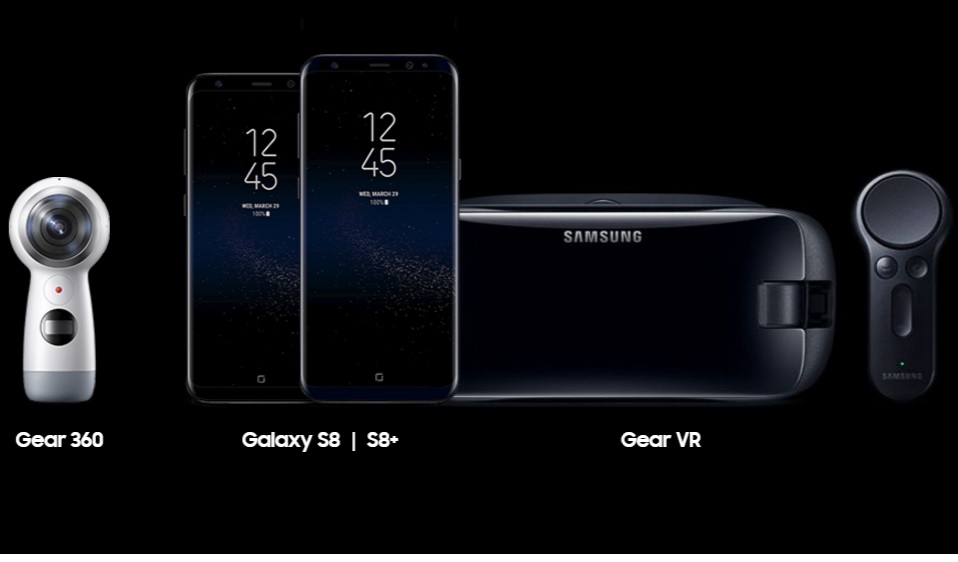 As we all know that Samsung has just launched its two new flagship devices under its Galaxy series the Samsung Galaxy S8 and the Galaxy S8+, and we can’t deny that theses two devices are the most beautifully designed best smartphone released this year from Samsung. It just got a lot more to know about, like packing a Snapdragon 835 chip, 4 and 6 GB of RAM, 64 GB ROM, 5.8″ and 6.2 inch″ Super AMOLED Quad HD 4K display and more.

1. Samsung DeX for Galaxy S8 and S8+
It’s a dock for the Galaxy S8 that let you convert your smartphone into a competent desktop computer by connecting it to a monitor, keyboard, and mouse for a desktop experience. It runs Android (with Samsung’s UI on top). It also includes a fan to cool your phone, along with ports for Ethernet, 2x USB 2.0, HDMI, and a USB-C port as well which lets you charge your phone while using it as a desktop computer on the go. It is only compatible with the Samsung Galaxy S8, and S8+ devices. 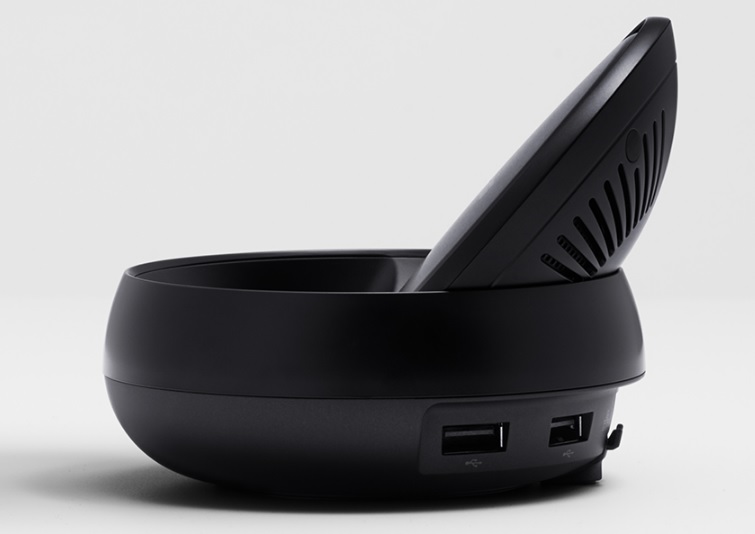 2. New Gear 360 Camera (2017)
Samsung also announced a new refresh version of its 360 camera. The new 360 camera can shoot videos in 4K (at 30fps), live stream your moments using the Samsung Galaxy S8 or S8+, and more. The battery life of the camera claimed to last up to 130 minutes. There is also a Gear 360 camera app that features 5 different viewing modes for shots taken from the Gear 360, including a 360 view, a stretched view, a round view, dual view, and a panoramic view. You can also use Gear 360 app to edit or customize your videos. If you like taking 360-degree videos the Gear 360 is definitely the kind of camera you can buy to record stunning 360º detail videos. 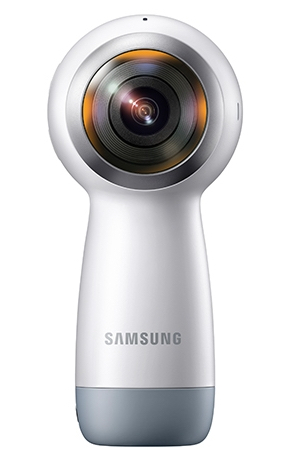 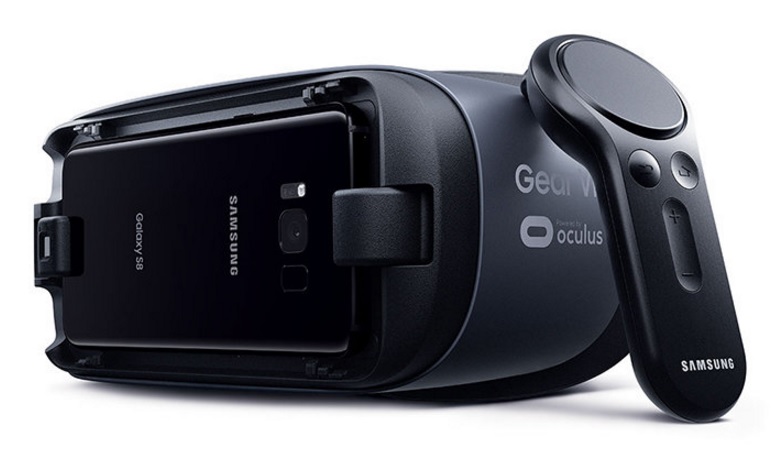 4. Gear IconX
Other than the pair of AKG earphones which you will get included in the box with the new Samsung S8 and S8+, there is something which we think you could find even more portable, the Gear IconX wireless earbuds. The earbuds are completely wireless and work very well with Samsung devices. They have a built-in storage of 4 GB, that mean you can save your favorite music tracks right on the earbuds, and listen to them without connecting to your phone every time. The earbuds also let you monitor your heart rate with its built-in heart rate monitor. The IconX also have a coating to make them sweat resistant, so you don’t need to worry about breaking a sweat while wearing them. 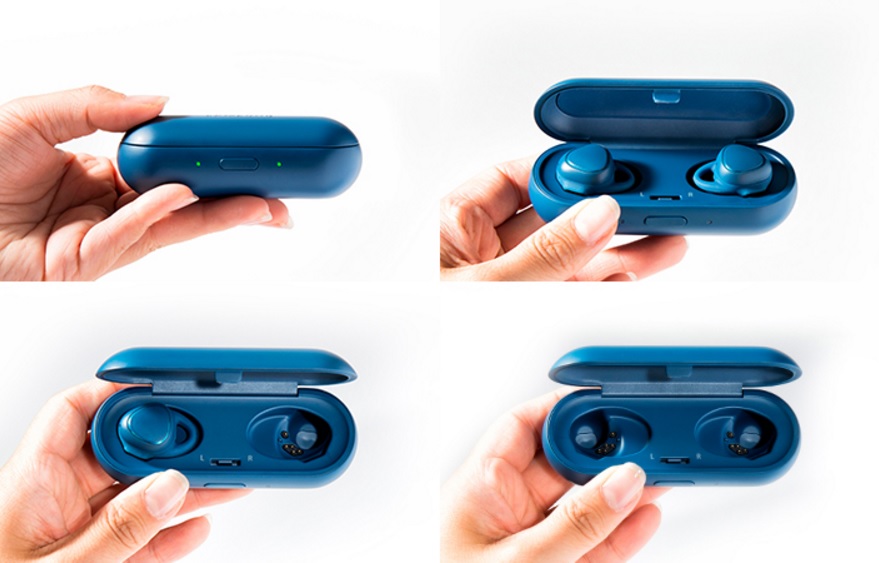 5. Gear S3 Frontier
Gear S3 Frontier is a kind of Smartwatch which can be used as an extension of your Galaxy S8 devices. Gear S3 Frontier smartwatch is something which is made for a good flagship smartphone like the Samsung Galaxy S8 and S8+. It comes with an always on display which lets you have a quick glance at the notifications, and the time on your watch. 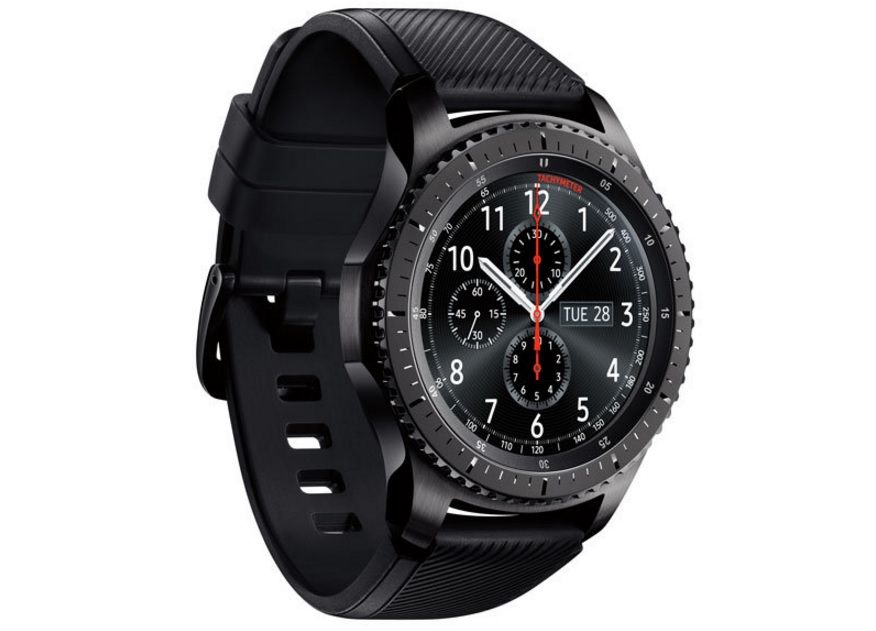 What is more interesting is that you can even make online payments directly from your Gear S3 Frontier smartwatch if you belong to a country where Samsung pay is available. The built-in GPS keeps a track of your activities and makes it easy to share your location with your friends and loved ones.

6. Clear View Standing Cover for Galaxy S8
It is an official cover from Samsung. The cover keeps your Galaxy S8 smartphone safe from getting scratches on the screen and any accidental drops. The clear front allows you to view the “always on” display of the S8 anytime you want, without opening the co. The cover can also be folded to convert it into a kickstand, allowing you to watch movies, take Skype calls, and a lot more, which make your hands free from holding the phone all time. 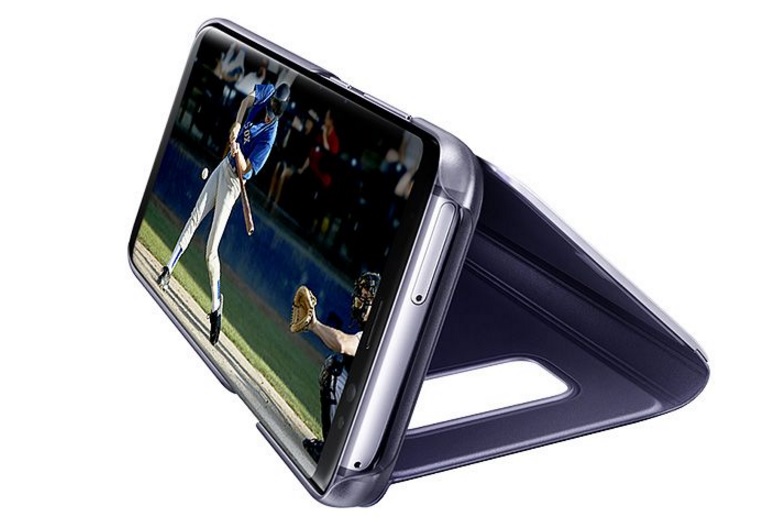 7. Samsung Galaxy S8 Keyboard Cover
I find it a really cool accessory for the Galaxy S8 and S8+ and would like to use with other Android Smartphones as well. This keyboard cover is meant for people who types a lot and sometimes they just think of using the physical keyboard on their smartphone, for such people this keyboard cover could be a good option. This is so simple to use, you can simply snap the cover on your Galaxy S8, and start typing. It doesn’t require charging or anything, just snap and start using it. 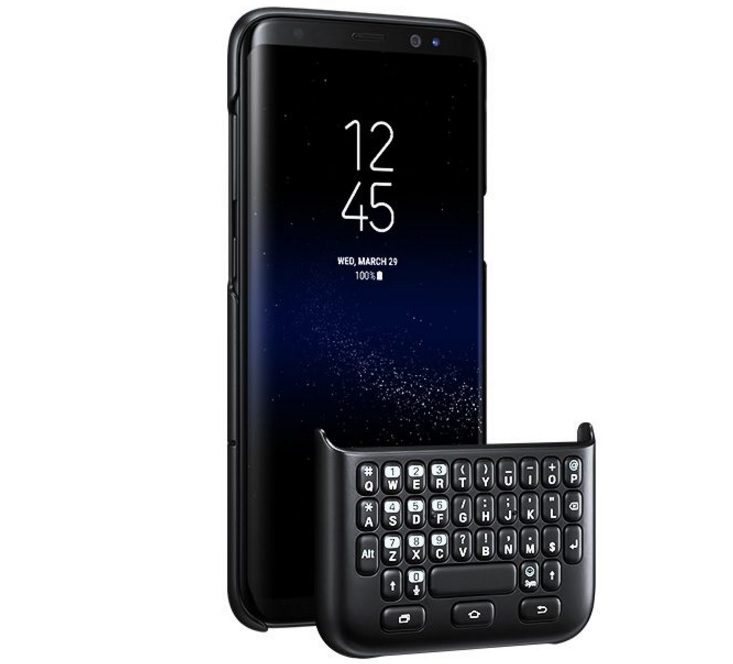 8. Fast Wireless Charging Stand for Galaxy S8 and S8+
The new Fast Wireless Charging Stand for the Galaxy S8 and S8+ is a 2 coil wireless charging stand that functions as both a pad and a stand, holding the phone vertically or horizontally so you can continue playing with your phone while its charges or keep it down to give it a rest. Samsung also unveiled a similar charging pad for the Galaxy S8. 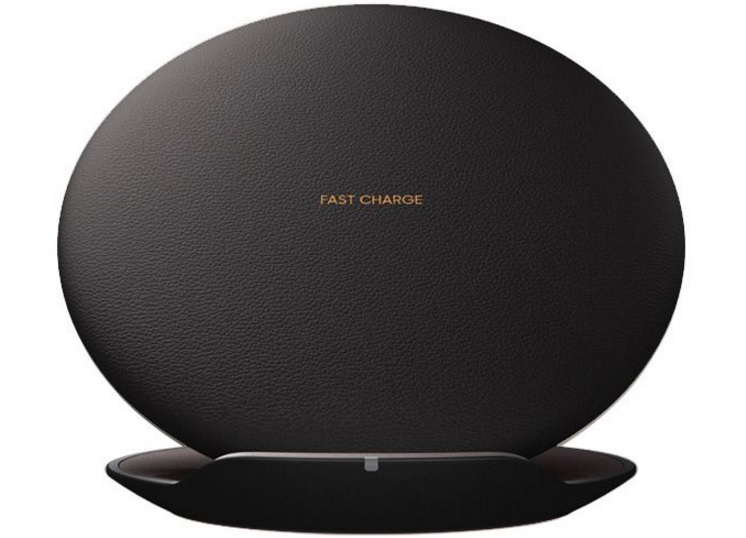 9. Aukey 30000mAh USB-C Power Bank
The Samsung Galaxy S8 and S8+ packs quite a larger 3000 mAh and 3500 mAh batteries, other than this, Samsung has also used Snapdragon 835, 10nm processor that we expect will definitely improve the power efficiency in the devices, bu if you still not find it to be sufficient the Aukey 30000mAh power bank could be a better answer for this. The power bank supports Quick Charge 3.0, that will allow your Galaxy S8 or S8+ to charged quickly, and it also includes a USB Type-C port that supports both input, and output, to charge the power bank. I think 30000 mAh will definitely give your smartphone enough juice to stay days long, no matter how heavily you’re using it. 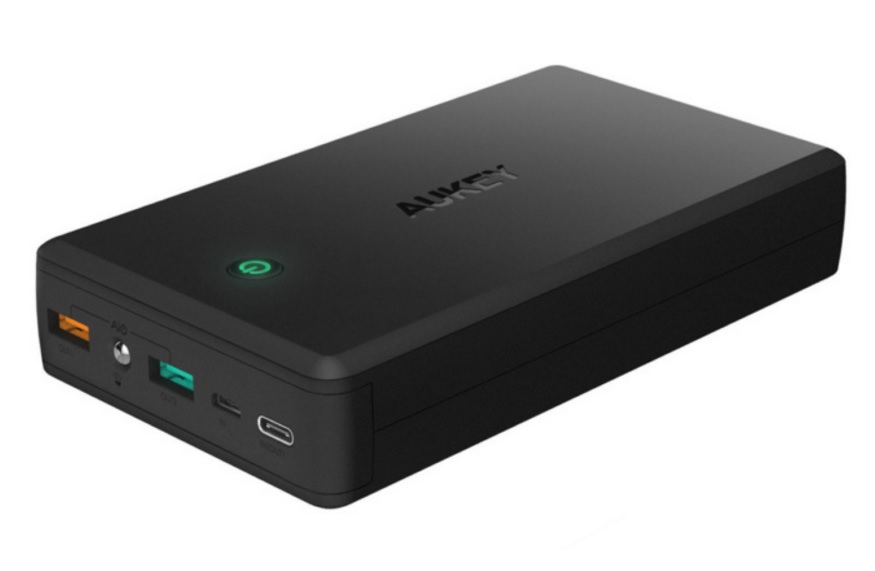 10. Car Charger with Quick Charge
This car charger is another cool accessory for the Samsung Galaxy S8 and S8+, if you often take long trips by your car then, this car charger must be on your buying list.With this charger, you can easily hold your phone on the dashboard, at the same time it also allows you to charge your smartphone with its 2x 3.0 Quick Charge USB ports which save a lot of charging time for your phone. With the help of Quick Charge 3.0 your Galaxy S8/S8+ will never go out of the power again while on the go. The charger also comes with a Trianium’s 12 month warranty. 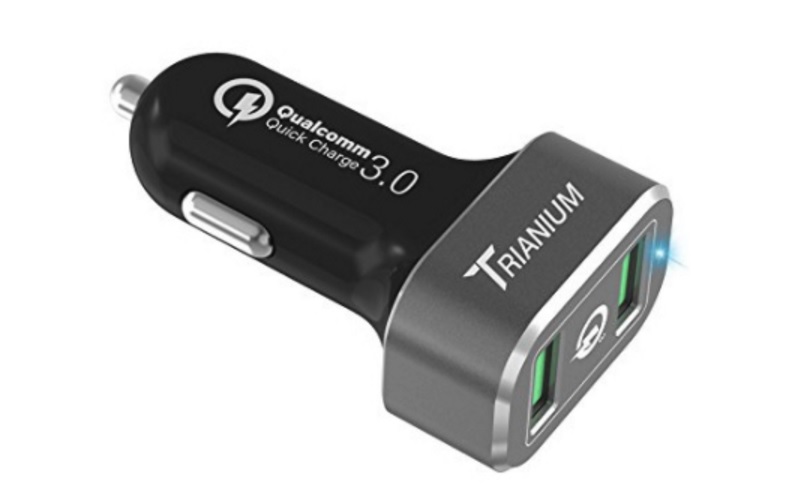 So, what you think of above-mentioned accessories? Which one of the devices you prefer buying and what accessories would you consider buying for your Galaxy S8 smartphone? Also, if we have missed anything important in this list which you think should have included here then let us know about them in the comments below.