But to mark an official release date for the upcoming Redmi K30 smartphone. Redmi has now confirmed that Redmi K30 series which is likely to include Redmi K30 and Redmi K30 Pro will be launched on December 10. It’s worth mentioning here that the Redmi K30 series smartphone will be the first 5G mobile phone from Redmi.

Redmi’s CEO Lei Jun via his official Weibo account today confirmed that official release date for the Redmi K30 series. Lei also said that “In 2020, Redmi is positioned as a “5G pioneer”. Pioneer means that Redmi will be the first to adopt the latest 5G technology.” 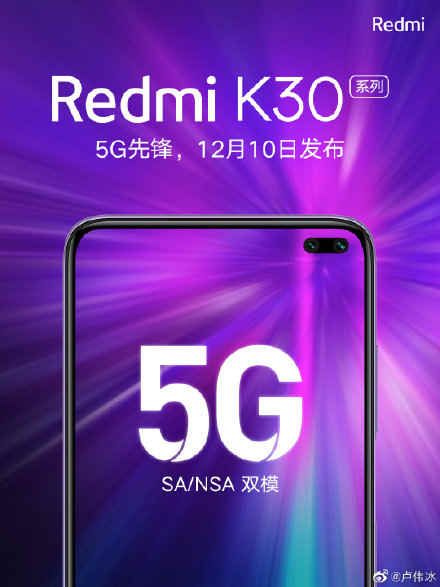 Lei also shared a teaser poster for the release date that also reveals that the Redmi K30 will also come with dual-mode SA/NSA 5G bands similar to the Realme X50.

Now let’s talk about the expected specifications of the upcoming Redmi K30 and Redmi K30 Pro device. Both the devices are expected to run MIUI 11 with Android 10 out-of-the-box.