In recent days, Capcom has suffered a severe attack by hackers, who have managed to acquire several files from the company’s internal servers. According to the recently released rumors, the Japanese giant intends to produce a version of Resident Evil 4 that can take advantage of augmented reality, exclusively for Oculus VR viewers.

Unfortunately, there is very little information on the subject for now. The only element that emerged would be a graph, available at the bottom of the article, which would show RE4 VR and Resident Evil Village both with the launch window set for 2021. 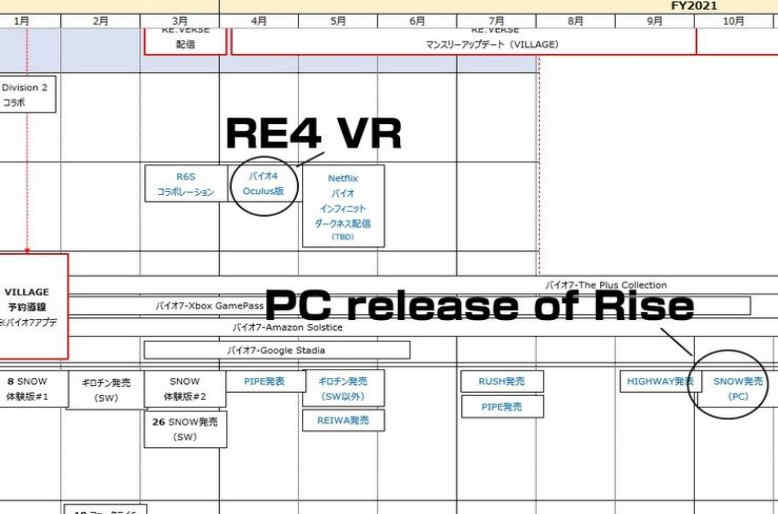 Waiting to find out more details on the story, we remind you to take this news with the appropriate precautions, given that it is simple rumors and Capcom has not yet expressed itself on the incident and on the leak of news that involved several of its games.

If the rumors leaked about Resident Evil 4 VR prove to be correct, they could represent further confirmation of what Dusk Golem said in the past months. It is worth mentioning that it would not be the first time that Capcom has released more games related to the iconic Resident Evil saga in the same year.

We just have to wait to find out more information on the subject, and in case the news turns out to be correct, we will find out why the Japanese company this time has chosen to work exclusively with Facebook Technologies, rather than with the PSVR, where we remind you Resident Evil 7 is playable.

Finally, according to what emerged, we remind you that the VR version of Resident Evil 4 should be available exclusively for Oculus viewers, with a launch window set for April 2021.