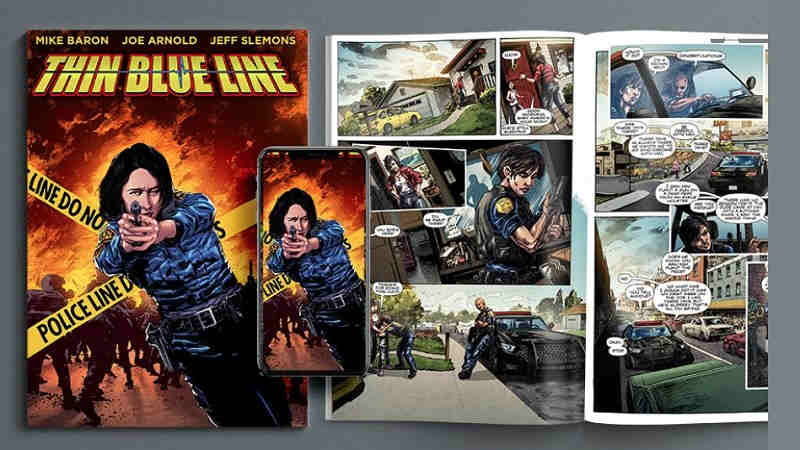 After quickly raising more funding than needed to self-publish his police-focused graphic novel ‘Thin Blue Line,’ Eisner-winning writer Mike Baron and his creative team are moving the project to Kickstarter today to give others a chance to become a backer and get involved in supporting law enforcement in the US.

Among comic book readers, Mike Baron is best known for writing Star Wars, The Flash, Nexus, and The Punisher for Marvel Comics, but this graphic novel may turn out to be one of the only comics he’s ever written to not be available at comic book shops, primarily because every publisher Mike reached out to said that making street cops the hero didn’t align with their business model.

Thankfully Baron’s readers don’t share those concerns. In fact, the response was tremendous.

“I was shocked at how easily we beat our modest crowdfunding goal,” campaign manager Chris Braly says. “Mike’s fans and the law enforcement community really came out in force on Indiegogo. So today we’re expanding the campaign to Kickstarter for 30 days to give anyone just learning about ‘Thin Blue Line’ a chance to own a first printing of what’s destined to be a rare comic book.”

‘Thin Blue Line’ tells the story of two law enforcement officers assigned to guard the mayor amid riots that begin over a police shooting.

“It’s not polemic, and definitely isn’t a cop recruitment book,” Mike Baron says. “It’s just a thrilling action drama, similar in many ways to elements my fans may recall from the five years I wrote Punisher, which were grittier and more realistic than most mainstream superhero comics.”

The book’s penciller, Joseph Arnold, is a full-time police officer, which lends authenticity to the story. Arnold had always hoped to work with Baron but had very personal reasons for wanting to illustrate ‘Thin Blue Line’.

“I was eager to show another side of policing,” Arnold says. “The story emphasizes family, interpersonal dynamics, and shows police officers from many different backgrounds. I hope it has a positive impact on policing. I’ve put my heart into every page.”

The book is complete and is on schedule to go to print in February after the Kickstarter campaign ends. The team has a record of successful campaigns and are anxious to get this into readers’ hands.

“We’re just thankful for the support Thin Blue Line is getting,” Braly says. “Moving to Kickstarter means anyone who wants to get in on a limited print run and support police can do so.”

Launching on Kickstarter is intended to expand the project’s reach to another unique community of comic fans. As a bonus, the Kickstarter campaign offers a few Kickstarter exclusive perks, including a signed hardcover artists’ edition.

A portion of the profits from ‘Thin Blue Line’ is being donated to three police related programs important to the team and relevant to the story. The campaign also hopes to bring attention to National Law Enforcement Appreciation Day taking place on January 9, 2022. Visit ThinBlueLineComics.com to learn more.