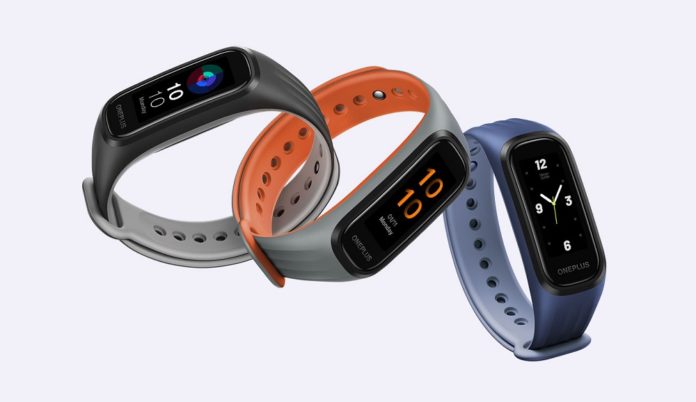 OnePlus has finally launched its first smart wearable called the OnePlus Band in India. The new OnePlus band comes with some exciting specs and features competing with other smart Bands in the markets today. OnePlus Band as its key highlights features an AMOLED display, a battery that can last up to 14 days, and a number of useful fitness tracking sensors. Check out the specifications of the OnePlus Band below.

Designwise, the new OnePlus Band looks similar to other smart Bands available in the market today. The OnePlus Band features a 1.1-inch AMOLED touchscreen full-color display. Users can also customize the appearance of the display by using different UI wallpapers.

The OnePlus Band comes with a 100mAh battery that the company claims to provide a 14-day battery life. The battery of the Band can be charged using a USB-A wired charging dongle. The Band further features user-replaceable straps with support for 5ATM and IP68 water and dust resistance.

From tracking your sleep and heart rate to tracking your favorite cricket shot, with the #OnePlusBand you can truly be #SmartEverywear.

This is the new face of fitness pic.twitter.com/N5NgHzmQOE

The new OnePlus Band can be connected with any Android device running on Android 6.0 or higher. By connecting the Band with the phone users can keep track of different health-related data using the OnePlus health app. The OnePlus Band supports Bluetooth 5.0 LE connectivity.

As for the sensors on the Band, the new OnePlus Band comes with a number of health and fitness tracking sensors such as a heart rate sensor, a SpO2 tracker, a sleep monitor, a gyroscope, and a 3-axis accelerometer.

The new OnePlus Band will go on sale starting tomorrow January 12, 2021, through OnePlus India’s online store, Amazon India, and Flipkart. The band will be available in three color options in India including Black, Navy and Tangerine Gray.